The $33 billion valuation commanded by U.K. financial technology company Revolut Ltd. in its latest fundraise may have raised some eyebrows, but the market is not in bubble territory and still offers investors good opportunities, industry experts said.

Online banking services provider Revolut cemented its position as the U.K.’s most valuable fintech in July following a $800 million funding round led by SoftBank Corp. and Tiger Global Management LLC. It now has a higher market value than NatWest Group PLC, the high street lender with roughly £775 billion of assets.

Industry experts say that while there are signs of overexuberance in some parts of the market, the surge in fintech investment is underpinned by solid fundamentals, such as a major shift toward digital banking, payments and e-commerce, that have been amplified by the pandemic. The first half of 2021 saw a “huge increase” in deals and valuations, which took place against a background of near-zero interest rates and cheap money, Tom Ward, corporate partner specializing in venture capital and private M&A at law firm Fieldfisher, said in an email. But this is more than just a story of capital looking for a home in a low-rates, low-returns world, he said.

“We believe the continued trend is more to do with an acceleration in the systemic shift towards a new digital (and financial services) landscape, fueled by a significant change in consumer behaviors and lifestyles that COVID-19 has exacerbated,” Ward said. This includes the rise of online shopping and a growing expectation that payments will be “flexible, instant and simplified,” he added.

E-commerce has boomed during the pandemic, with 46.5% year-over-year growth in sales in 2020, according to eMarketer, a research company. Sales are projected to rise a further 20.5% in 2021 to £185.22 billion. The use of digital payments is also increasing, with 17.3 million people, or 32% of the U.K. adult population, registered to use mobile payments as of the end of 2020, according to industry body UK Finance. This is an increase of 7.4 million people from 2019.

Checkout Ltd., which offers services such as payment processing and fraud detection, scored one of the largest capital raises in the U.K. fintech industry in 2021 after Revolut, clinching £330.4 million in a series C from a raft of investors including venture capital firm Blossom Capital Ltd. and Singaporean sovereign wealth fund GIC Pte. Ltd.

Payments fintech Rapyd Financial Network (2016) Ltd. also found favor with investors, raising £220.1 million in a series D in January, which it then went on to top up with a series E of the same amount in early August.

For Howard Womersley Smith, fintech and data partner at law firm Reed Smith, valuations are on the high side but not excessive — and this is not necessarily a bad thing.

“High valuations can be good press for new fintechs, who need all the help that they can get as they push deeper into the mainstream financial services market,” he said in an interview.

Revolut looks “possibly” overvalued, but the company is an outlier in this regard in the U.K. market, he added.

The amount of money coming into fintech may be high, but so are the number of successful exits, which means that investors, particularly venture capitalists, remain keen on the sector, according to Ronit Ghose, global head of banking, fintech and digital assets at Citi Global Insights.

“We are seeing a lot of M&A, and a lot of IPOs. You can see that for successful fintechs, whether that success is measured by client numbers, profits, revenues, there are a lot of exit opportunities. That’s what’s driving a lot of money into the space,” Ghose said in an interview.

There has been no shortage of M&A activity involving major financial services companies buying up British-grown fintechs this year either. Visa Inc. agreed to buy The Currency Cloud Ltd. in July a deal that valued the business at £700 million, while U.S.-based credit scoring giant Equifax Inc. bought Accountscore Holdings Limited, a U.K. fintech that uses open banking technology to interpret data, in February.

Not all fintechs will achieve such success, however. The Dot Com boom of the late 1990s launched some of of the giants of internet commerce that are still with us today, but it also produced a lot of companies that did not survive, Ghose said.

“Plenty of companies being built now just aren’t going to make it for a variety of reasons. Maybe the management team don’t have the right execution skills, maybe their product or service isn’t differentiated. Maybe the regulator will bring in new rules that mean their business model doesn’t work anymore,” Ghose said.

“But I don’t think it’s all speculation. There will be failures, but there are some great opportunities, too.” 5 competitor analysis tools for marketers in 2021

Sun Aug 22 , 2021
Discover the analysis tools that can keep your online business competitive in 2021 With the pandemic turbocharging demand in online shopping, the digital retail landscape has never been more competitive for brands looking to get their products in front of consumers.  But with so many established players, as well as […] 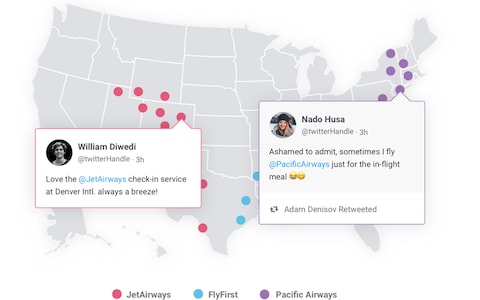