The owner of a San Antonio-based fast food chain is not just on a mission to revolutionize how Americans see vegan food, he also wants to throw out the traditional franchise model of starting slow.

Founder Lucas Bradbury started the Project Pollo sandwich chain in September after selling his home to open a food truck outside Roadmap Brewing Co. near downtown. He opened his second location three months later, in Austin, and a seventh just last month. Seven more locations are planned to open by the end of the year, averaging about one new location every 30 days.

“You can go slow and steady with a base, or you can go to market at 100 miles per hour and see what happens,” Bradbury said, sitting for a rare moment of peace in a Project Pollo location off San Pedro Avenue. His phone is ringing continually. “Throw your pickles at a wall and see what sticks. I don’t know what’s going to stick, but that’s the beauty of it.”

“This is a very quick expansion, there’s no question,” said Doug Fisher, president of food services consultancy FHG International. But the pace is not unheard of, he said.

Vegan and vegetarian offerings at mainstream restaurants have become more common since 2019, with Panda Express announcing plans to introduce a vegan chicken menu item using a Beyond Meat product, but an all-vegan menu is still a novelty even in urban centers.

Bradbury’s concept is to sell vegan food to non-vegans that is convenient and affordable. Internal surveys show the overwhelming majority of customers aren’t vegan or vegetarian, he said.

“It tastes like chicken,” said Carlos Monteagudo, a musician who was one of a few patrons sitting in the chain’s Alamo Ranch location shortly after lunchtime last week. “Definitely scratches my Chick-fil-A itch,” he said.

Growing up in rural Kansas, Bradbury did more than plant crops and run fence. He’s slaughtered scores of livestock, which he recounts in chilling but detached detail.

Those experiences played no role in Bradbury’s decision to go vegan, he said. Instead it was a journey driven largely by health problems. For years he felt ill – “like complete s—, every day,” he said.

Convinced it was from a dietary cause, he devoured study after study comparing the eating habits of different cultures and came away convinced that a vegan diet is the key to health and longevity.

“If it doesn’t grow from the Earth, I don’t eat it,” he said. (Although his fatigue, he said, later turned out to be the result of allergies).

Bradbury said he was inspired to start the chain to prove that there’s an alternative to traditional fast food, which, because of its reliance on large-scale commercial animal agriculture, cannot continue its course without a “huge environmental detriment to the planet.”

Bradbury’s past experience in the industry includes working as a partner for Earth Burger, a vegetarian burger chain, as well as an area director for Papa John’s Pizza and Which Wich Superior Sandwiches.

“My concept is not based on pushing veganism or vegetarianism in people’s faces,” he said. “It’s about offering a more sustainable future.”

The vegan venture marks a small-business foray into the “chicken sandwich wars” being waged among big fast food chains, which has sent poultry prices soaring.

Bradbury’s “chicken” is a proprietary soy product shipped in bulk directly from a vendor in Taiwan. Without going through relatively expensive meat-substitute middlemen like Beyond Meat or Impossible Foods, he told a fast food publication that a chicken strip sandwich costs him about $1.83 to serve. He charges $7 for the signature sandwich, which comes with pickle slices and an aioli.

A deluxe offering including vegan versions of bacon and smoked gouda sells for $8.50. The menu also includes a spicy “mac n’ cheese” sandwich, as well as vegan wings and burgers.

In another divergence from standard industry practices, Bradbury is offering higher-than-average compensation. Jobs for cashiers pay up to $15 an hour and come with health and dental insurance. He said he is not feeling the worker shortage still gripping much of the service industry.

Retaining workers could play a crucial role in the chain’s survival. “The labor shortage is the biggest issue facing the industry,” said David Henkes, a senior principal at food service consultancy Technomic.

The average wage for a fast food worker in San Antonio’s metropolitan area was around $11, according to the U.S. Bureau of Labor Statistics figures from May 2020. To attract applicants, employers have begun to sweeten the pot, with restaurants like McDonald’s and Bill Miller Bar-B-Q advertising local hourly wages up to $12.

To keep overhead low, Bradbury targets “second-generation” fast-food storefronts for his new locations. The location on San Pedro Avenue, for instance, is the site of a former Subway. Inside, there was no wall art and few distinctive markings just weeks ago, though a recent visit saw workers installing outdoor graphics, wood paneling, and accent walls while patrons ate.

While many fast food chains often spend $1 million or more on each location to create a uniform atmosphere and recognizable buildings, Bradbury says people come to Project Pollo for the experience, not the atmosphere.

“Nobody cares what the outside of my building looks like, as long as we’re clean and have fresh and quality food,” he said.

Henkes said Bradbury’s low-cost, fast-expanding strategy could pay off at a time when drive-thru and curbside pickup are on the rise and many fast food locations have shuttered and left behind empty real estate. “He’s making lemonade out of pandemic lemons,” he said.

Henkes also said it’s a good time to get in on the ground floor of the fast food industry. The industry is poised for growth in the next couple of years, and people especially right now have a lot of discretionary cash to spend.

Project Pollo’s eighth location is set to open this month in Dallas. The chain’s rapid expansion could accelerate even more if Bradbury fulfills his goal of opening a 100th location by the end of 2024. The expansion has largely been self-funded, as each location roughly pays for the next, Bradbury said. He said the only investor funding has come from the sale of a 10% stake in the company to a supplier.

Whether there is a market to support Bradbury’s vegan venture remains to be seen. But it won’t be the last one like it. His wife, Morgan Bradbury, just opened up her own vegan grocery store in St. Paul Square.

Sat Jul 24 , 2021
Bank of America and Chase launched new credit cards this week. Major issuers are on their way to recovery after the pandemic cut into credit card spending. Insider Intelligence publishes hundreds of insights, charts, and forecasts on the Payments & Commerce industry. Learn more about becoming a client. The news: Two […] 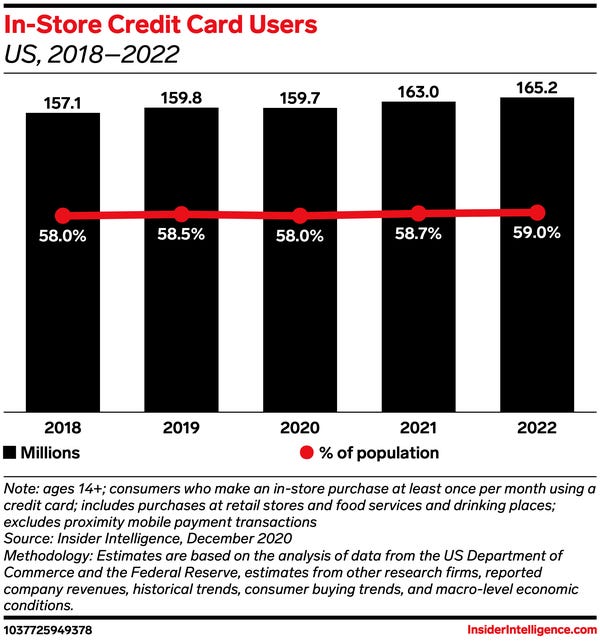